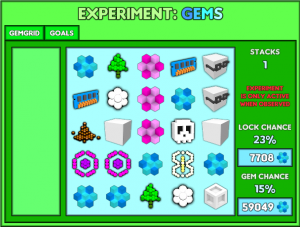 The Gem experiment is one of 12 experiments in the laboratory, available at laboratory tier 6.

The goal of the Gem Experiment is to fill the board with gems.

Clicking a tile rolls the tiles around the central tile in a + formation (Max is 5 tiles) into random icons. Roll time varies, from 1 second to 15 seconds.

You must complete the gem board 9 times in order to receive 1 stack.