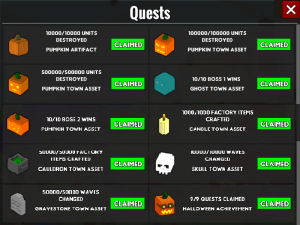 The Halloween Event is a yearly event held from October 31st to November 6th. It was first added in 2021, and expanded on in 2022.

Like Talk Like a Pirate Day, Dr. Cubical will dress in a costume, appearing as a pumpkin, calling himself Dr. Pumpkical.

The first incarnation of the Halloween event was a simple quest board, with 9 total quests ranging from defeating a number of bosses in the Statue of Cubos to crafting a number of factory items, and completing all of them would award an Achievement and an Artifact.

As it was the first Halloween event, it was also very simple, and very easy to complete. 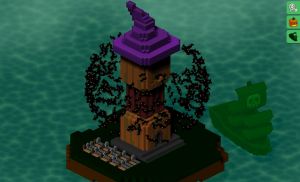 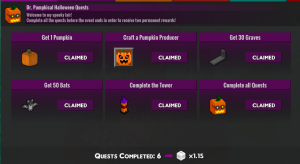 The second Halloween event in contrast, is much more complex. To even access it, you must be at least Military Tier 1. After that, clicking on the button that has appeared at the left-side of the screen, or the Ghost Ship near Shipyard, will take you to Halloween Island.

Halloween Island is the main center of all things spooky. Dr. Pumpkical's spooky lair, the Spooky Tower, is where you will find the revamped quest system, along with upgrades needed to complete the event. There are 3 main currencies:

Souls. Each are used in their own section of the Spooky Tower to buy upgrades.

All three have differing ways to obtain: Pumpkins have a chance to spawn every time the wave counter changes and will bounce around the map for 30 seconds before disappearing. Clicking on them will reward you with pumpkins.

Blood must first be unlocked via a pumpkin upgrade to be collected. Once purchased enemies will drop blood on death as resources are.

Souls must also be unlocked via a pumpkin upgrade to be collected. Once purchased enemies will have a chance to drop souls on death. The change is based on modules with the #darkness tag equipped and can be upgraded with souls.

There are also three secondary resources: pumpkin brick (image), bats (image), and graves (image). All three are obtained three same way. All of them give a +0.01× resource (town, not event) boost per resource. All of them are unlocked at certain thresholds, and never spent.

Pumpkin bricks are used to upgrade the tower, and for the first column of assets. They have a formula of pumpkins >= 2 * 8bricks needed to unlock.

Bats are used to get grave stone town assets probably. They have a formula of blood >= 1000 * bats3 needed to unlock.

Graves are used to get the grave town assets. They have a formula of souls >= 50 * graves4 needed to unlock.

To proceed in the event, various upgrades must be purchased. There is a tab for each type of upgrade (pumpkin, blood, and soul) but this only determines the cost - it might upgrade a different resource.

Strategy: Buy upgrades cheapest first. You only need one level of Factory Pumpkins; if you don't have Factory Floor 2 then pumpkin producers won't be relevant, and if you do then you can plant your initial factory pumpkins and not need any more. The upgrades for "+1% Blood per Brick" line up closely with the Pumpkin Brick thresholds, so it makes sense to wait to get the next brick before buying. Similarly, it makes sense to wait for the 6th pumpkin brick before getting "1.01x pumpkins per Bat", but do get that next, since it will greatly speed up getting the last two blood upgrades. Getting the last bricks will depend on getting >300 bats, and maxing out "1.01x pumpkins per Bat".

Strategy: "1.25x blood" is the most important upgrade, focus on it and buy the rest with leftover blood, when they cost < 1/2 as much as the next level of 1.25x. Your primary goal is boosting blood production so you can get to 300 bats, and after that maxing all the rest. Although maxing out the upgrades is expensive, it is nowhere near as expensive as bats (300 bats = 2.7e10 blood), and all the upgrades here will ultimately help you more than the time it takes to acquire them.

Strategy: Buy upgrades cheapest first. Probably you will not be able to max "+1% pumpkins per Grave".

The formulas that govern quantites like "Pumpkins per Click", etc., are not always obvious. Here the complete formulas are documented.