Infinity is a phase of the game which opens up at Military Tier 12. Infinity begins when the player reaches Era 100B in endless mode on any difficulty of a given region.

Upon entering infinity phase you gain access to another tab in the second floor of the workshop. At first only the left side called “infinity modules” is unlocked, here you purchase modules in the grid which lets you buy the next module(s) in that chain if any. Buying all of these is your first goal on infinity phase.

Income of the Phase

Early Infinity: by now you should have at least 1 t5 producer, for getting more money then a t5 you should be farming neutral nightmare (r11) at wave era 90b.

Mid Infinity: (refer back here once you are MT14) Once you get to mt14 you should get to infinity 1 on impossible chaos (r15), if you cannot survive up to wave 90b era 90b, keep farming neutral nightmare. Then start a new round and use critical wave jump to reach Era 90 billion and farm the enemies there.

Late infinity: (refer back here once you are starting to charge stones) When you hit 90/90 infinity 1's, you should push to high infinities (1M is enough for a decent charge speed). To do that you need to increase your wave acceleration factor for a few hours (based on your goal), then you push up through infinities, when you get all regions to infinity 1M or above, at factory you craft exotic producers/do a lot shipments and etc.

Infinity shield buffs: Enemies get increases stats for each infinity and stack with era shield with the formula of base * Era shield * (1+# of infinity) ex: infinity 1 enemies have double the stats of their era counter parts and inf 9 as 10x the stats of the era enemies.

infinity foundation: makes it so infinity type damage doesn't always instakill you, era damage shield isn't ignored so you can still take 1e300+ damage if you don't get /inf on era damage shield.

Now that you have all the infinity modules you can reach Era 1 on higher difficulties that were you weren't able to in era phase. mt13 and 14 don't unlock and software that speed up reaching Era 1 in modes you haven't reached it on so the most efficient goal now is finishing 90/90 Era 1, which is means for all 15 regions the endless mode of all 6 difficulties have a highscore of at least Era 1. The reason this is so important is because of the era software Wave Horizon and Wave Marathon, with 90/90 Era these software make your acceleration over 100 times faster. You may be worried about it taking a very long time because Era takes like 45 minutes at the beginning but each era you get will shorten the time it takes to get all the next era and the last few eras take only a few minutes and the total time is around 3-5 hours.

Pretty much any blueprint will work as long as it has enough good infinity modules but if you don't want to make your own you can use the one for 90/90 inf's in the next section.

Once your acceleration is as fast as possible you can quickly reach infinities for tiering up your military. You do not need to max out the era hp divider to infinity anymore but you will still need to reduce the damage to /inf. First do Region 1,2 and 3 on easy to get to mt13 and then do R4-9 and R11 for reaching mt14. Now, you have to repeat that grinding again for getting 90/90 Inf 1's, which same as 90/90 era 1 means for all 15 regions and 6 difficulties for each, endless mode has a highscore of at least infinity 1.

Surviving Era Damage Red Skull: Make a build comprising of as many block and attack slowing modules and as you can fit, blocks deny 100% of damage so it makes the era shields attack bonus not affect you (while the era shield has a red skull in damage, resistance and other non-100% damage mitigation does nothing with the exception of temporal barrier). You do not need infinity foundation because you're facing era enemies not donuts.

Penetrating Era Health Red Skull: As for the Era hp shield, there are many infinity modules that do instant kills or infinity damage (infinity splash is the only source of infinity damage that doesn't suck), which allows you to kill enemies pretty easily.

The Infinity Stones are a set of extremely powerful items that provide game-changing effects, and are the main focus of this phase. Your main objective is to charge each infinity stone, which simply takes time. When first accessing one of the stones, the times to charge it will be so large it is essentially impossible. However, these progress bars can be sped up in two ways: Increasing your infinity high scores for the provided regions, and purchasing Exotic Refinements (unlocked at MT13). Both are equally important, and Exotic Refinements are much more noticeable at lower infinities. They are permanent upgrades, meaning they are both worthwhile investments.

With the exception of Neutral being unlocked at 1m era, Infinity stones are collected by going to its respective region and killing a disabled enemy of that element while being at Infinity 1 or higher. The region where each element is found is very intuitive and I recommend guessing yourself.

Once they're collected they will show up in the infinity board with some conditions before you can upgrade them, these conditions only need to be met once and the stones unlocked forever. All stones have the conditions of prestiging their respective laboratory experiments 3 times and have 50 essence in the 3rd tab of the Era Workshop.

To charge a stone you will need to get a base value of 1 trillion (1e12) elemental energy, which can be reduced by purchasing the "Charge Required" exotic refinement. To get energy you have to wait for the top bar (charge) of the chosen stone to fill up, each time it fills you will get an amount of elemental energy which can be boosted by the bottom bar (production), the time it takes to charge can be reduced by the middle bar (speed)

the base time it takes for a bar to fill is equal to 8760 hours/sum of all your infinity highscores on the specific region for that bar, region depends on the stone and the bar

There are 6 exotic refinements:

Speed bonus and production bonus increase how much each fill of production and speed bar boosts the charge bar, but are linear in their scaling which makes them really bad beyond the first 10-20 upgrades. 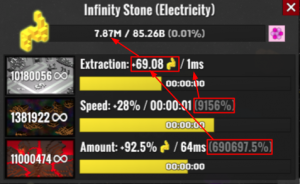 This is the Charging menu shows the bonuses, charge times, infinities and amount charged.

Once a stone is fully charged it can be used on an infinity perk and then need to be charged again. After being used the speed and amount bonus that were stockpiled get reset. The ones that are in bold are highly recommended.

These use up all the charge and puts the stones on charging to perform a 1 time use function. These perks can be used infinitely with a couple exceptions, they display an "X" on the button if wont do anything, for instance if you want to use the water stone to finish a shipment but you don't have a shipment currently in progress.

When started, Toggle Perks doesn't use up the charge but it makes the stone not be able to be used on anything else. They last until you turn them off and then they will lose the charge and start recharging.

Unlock perks use up the charge and put the stones on charging for a permanent buff.

The Infinity Forge is unlocked via infinity stones. It allows the player to edit the tier of any module (excluding infinity modules) for free.