Era is a phase of the game which opens up at Military Tier 8. Era begins when the player reaches wave 100B in endless mode on any difficulty of a given region.

Upon reaching Era, enemies gain an Era shield and various Era powers, depending on their element.

There are several ways to combat the era enemies' shield and various powers, which most are found in Workshop-->Stairs

Here is a general overview of Era workshop. INCLUDES SPOILERS!(credit to @TECHTERROR731 on the discord)

-All enemy types have each two new special traits, one offensive and one defensive. -By clicking the stairs icon in the Workshop, you can access the era workshop. Build around either being able to survive hits from an enemy or killing one (you need to be dealt at least 0.1 hp of damage for it to count toward hits taken, so universal shield and way too much elemental resistance won't do the trick). -All enemies have an "era shield" which divides damage taken and increases their attack by 1e20 (multiplied by 100,000,000,000,000,000,000). This shield can be reduced by unlocking the second tab in the era workshop by unlocking both enemy infos of any specific element. This "era shield" increases by a factor of ~50-60 each era.

-Era inhibition (second tab) : Here you can reduce the Era shield using blue resources and blue gems! The first time buying them will reduce their power by 1e20, and each subsequent one will reduce the power of the shield by about how much it would increase by incrementing the era counter by 1. Spending blue resources (and hits taken/kills of the specific element you're researching), you can unlock the ability to disable that enemy's era abilities during runs! Beware that these costs are multiplicative (at a cost of 1000 XP, the second module to disable would cost 1,000,000 XP and the third 1,000,000,000 XP) so choose carefully which one(s) you want to disable each run. Researching the same element 5 times unlocks the third tab.

-Era experiments (third tab) : Using the same system of kills/hits taken and blue resources, you can gain essence for each element. These essences can then be spent to gamble for special modules, loosely based off their specific element. You need 5 research of an element to do experiments on it. Here, you can also decrease the XP cost of the in-run Era shield reductions using resources. Killing enemies that have their era traits disabled has a chance to drop an artifact that can help with the it.

In the first tab of the stairs, you will find various bars, 2 for each element to fill. In order to fill these bars, you must kill era enemies of that element and get hit by them (You must take at least 0.1 damage to count as a hit) during tower testing. Once a bar is filled for an element, you can reveal it to find out one of the element's era powers. When both bars are revealed for one element, that element may now be disabled and will appear in tab 2 and unlock tab 2 if you haven't already done so. You may need to reach era in different regions if you want to reveal all the elements.

In the second tab of the stairs, you will find many bars and buttons. At the top, you will see your era dividers. These divide the era shield of era enemies so it is easier to destroy and survive them. You can increase your dividers by pressing the two buttons beside each icon. Under your era dividers you will find a variety of bars and buttons. These let you decrease the cost to disable the powers of each element. The two buttons over the bar will let you speed up the process, at the cost of some hits taken and enemies destroyed.

In the final tab of the stairs, there is a bar and many tabs. The bar will let you decrease the cost to temporarily increase your dividers while in a round of the tower testing. You can also speed up the process by using gems once you get the Chained Mannequin or you can speed up it with the power plant once you get the Ominous Coil artifact. Under the bar there are many tabs. These let you gain elemental essence which can unlock modules to the right of the bar. Once you get to Military Tier 9, elemental essence will also give you a damage boost for each essence you have. 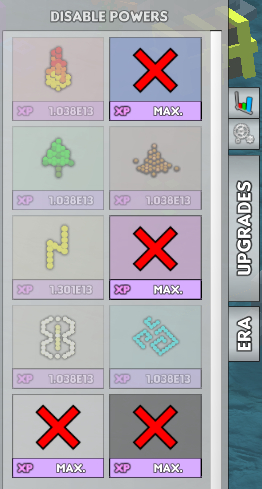 Every enemy has certain powers based on the element it has. These powers can be disabled by using the new Era tab during Tower Testing, at the cost of Tower Testing XP. The formula for the XP cost of disables is base_cost * (100 + 0.9 * base_cost)disables, where base_cost is the initial cost (starts at 1000, but can be reduced in Tab 2), and disables is the number of already-disabled powers.

Note that the costs of already-disabled powers don't matter, so it can help to save your lowest-cost disable for last.

The enemy powers are as follows:

Kills - Chance to stun the tower.

Hits - Reflects 10% of incoming damage. (Based on HP, gets multiplied with Era shield)

Kills - Reduces resistance against all elements.

Kills - +100% damage split across all elements.