The statue of cubos is a building you use to fight bosses.

Upgrading the statue of cubos will unlock more bosses. There is only one boss right now.

Boss fights are unique, as every different boss is essentially a different game, with each boss playing differently than the core game.

The boss menu select screen is to the left, where upon clicking the screen opens the boss selection menu.

Every boss menu screen has upgrades to purchase, the control schemes, and an info section.

"With the power to control the wind and water, Cylindro unleashes his rage onto his enemies in forms of large waterstorms. Sometimes he just tires to crush them with his entire body."

These upgrades help the tower defeat Cylindro. The upgrades are: 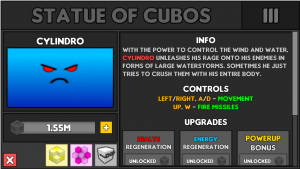 Cylindro is a large cylinder who will try to attack you with headbutts and water-storms.

You can dodge his attacks by hopping to adjacent pillars.

To damage cylindro you need to fire missiles, this will cost energy.

Energy orbs spawn randomly on pillars, use these to restore energy.

If you defeat cylindro you are rewarded one exotic gem.

VERIFY : remove that part to verify If you hit cylindro before his first spin, he will do a headbutt.

If you hit cylindro before his second spin, he will do a water storm. (1 side)

If you dont hit cylindro or attack him after his second spin or hit him during the spin, he will do a water storm. (2 side) 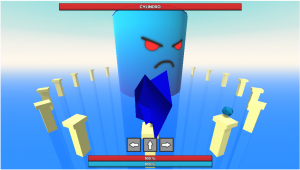