The Power Plant is a building used to generate electricity to give speed boosts to other buildings. 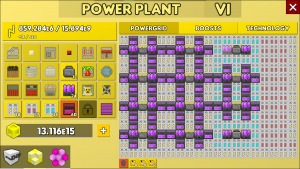 The power grid is where you place structures in order to generate and store energy.

You can place structures by selecting one from the list on the left of the screen, and then clicking an empty tile.

To delete a structure, right-click the filled tile while not having any structure selected from the list. Doing so will refund you 25% of the resource you spent buying the component. This can be increased to 50% if you have Component Recycling Skill.

Structures can connect with each other without the use of pipes, but pipes can be used to use resources more efficiently at times.

This is where you spend your energy to speed up other buildings:

The more energy you use, the longer and stronger the boost is.

You can boost multiple buildings at the same time, but selecting less makes the individual boosts better.

These are your structures for use in the power grid.

You can unlock more by upgrading the Power Plant in the Construction Firm.

You can upgrade structures if they are upgradeable.

Transports 1000L of gas or fluid per tick.

Can be placed anywhere, and is not needed to be connected to anything.

Needs to be placed next to a coal boiler.

Has to be replaced periodically, as it will run out of coal.

Needs to be connected to a water pump and a coal chest to function.

Transforms 10L of steam into 30 power per tick.

Needs to be connected to an active coal boiler to generate energy.

Can be placed anywhere, as long as a fluid pipe connects it to an oil furnace.

can be placed anywhere, as long as fluid pipes connect it to a gas turbine.

Uses 20L of water to provide 3 power per tick.

Can be connected with pipes or directly to a Water Pump

Produces 1 power per tick (0 when raining).

Produces 0~4 power per tick (min. of 0 without wind and max of 4 when there is a hurricane).

Lava can be moved with a fluid pipe.

Can be connected with a pipe or directly to a lava pump.

Transport 1000L of Plasma per tick