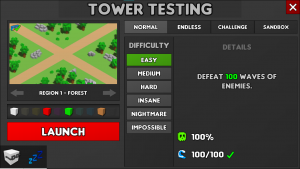 The new round Screen

Tower Testing is the core loop of the game. This is where you test the strength of your tower against a variety of enemies.

You'll only be able to say that you created the perfect tower if it can withstand any attacking force in any scenario imaginable.

Therefore, you have to test your tower in different regions against waves of different enemy types.

The tower gains experience by destroying attackers, with which modules installed inside the tower can be upgraded.

The tower used for the test will be replaced by a new one at the end of the test (round), and all experience won will be lost. But don't worry!

Testing also provides resources to unlock and upgrade modules in your town.

As soon as you build a workshop you will also have the option to change the blueprint for your tower and the installed modules. 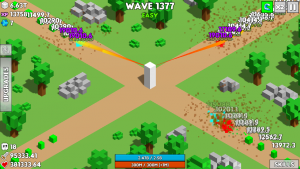 When you start a new round enemies will start approaching and attacking you from fixed locations.

Your tower will automatically retaliate against the attackers based on the modules installed in it.

Each time you destroy an enemy they will reward town resources and xp.

It is important to invest your xp to upgrade modules on the left side of the screen.

Eventually your tower will break and the round will be lost. (Nobody can start out perfect.)

Losing is part of the process of getting stronger. Now that you have gained some town resource you can upgrade the your modules inside the workshop.

For each round played you also gain some town xp.

When you reach a certain amount of xp your town will level up and you get a skillpoint which you can use to purchase skills that improve building's functionality.

There are two ways of upgrading your modules:

You gain xp for destroying enemies that can be used to improve your modules during that round. After a round is completed all modules reset back to the state they were in before the round was started.

Modules can be permanently upgraded inside the workshop.

This means that they start with a higher level when you start a new round.

Your tower needs to work in any environment and that's why you need to test the strength of your tower in different regions.

When you select a region, you will see a infographic displayed like the one above.

Lastly the bar on the bottom represents the elemental properties of the enemies you will encounter.

The region can be changed by clicking on the map preview seen below:

Notice it says Region 1, there are 15 regions in total for you to unlock and test your tower in.

To unlock a new region, you need to beat the previous region in Easy Difficulty in Normal Mode.

Each region has a variable amount of paths (in the above picture, there are 4 paths) and enemy types, and in the future they will have special rules and effects, secrets and unlockable assets for your town.

Most notably, each region has a random chance to drop modules. The amount of modules that remain uncollected is represented by the module icon

in the top left of the map preview.

An effort should be made to collect these as they will increase your power and give you options for making better Blueprints.

Unlocking regions, collecting and upgrading modules will allow you to soft prestige. Soft prestige is done in the Military tab inside of the headquarters building.

The normal mode allows you to test your tower against the environment in the given region.

Same rules as the normal mode except there is no wave cap.

Each region have 6 "Level" of challenges, having a special set of rules/restrictions that make the game harder to beat. Each level requires the player to reach a certain wave. Upon completing the Level, rewards are given to the player.

(In the game current state, challenge mode is playable in the first two region. You can unlock this mode in any other region but there will have no challenges available.)

Measure your tower against 100 waves of enemies in Normal Mode or 60 seconds in Endless Mode to calculate your idle factor.

Sandbox can currently be unlocked on any region by beating the Impossible Difficulty in Normal Mode.

Sandbox mode has many more planned features that will be added in future releases of the game.

The difficulties control the rewards, and the strength of enemies.

Each difficulty has to be unlocked by beating the previous tier of difficulty, difficulty options have to be separately unlocked for each region.

Elemental resistances are increased in the higher difficulties.

On impossible, universal cubes and the remaining elemental cubes are added regardless of enemy composition.

In the future, the difficulty might also influence certain rules regarding the gameplay or the environmental effects and bonuses.