The AI is a very powerful tool that can be used to automate nearly anything. To use the AI you have to create AI scripts in the headquarters.

An AI script contains three sections that control its behaviour:

An impulse or trigger is a certain event that activates an AI script. A script can contain zero, one or more impulses and will react to all of them equally. It is possible that a script can trigger multiple times before it has finished execution. In this case multiple instances of this script can run in parallel.

An action is something that the AI does when the script becomes active. The order of all actions is important where the action at the top is executed first and then all following actions are executed one by one. There is no way to execute multiple actions at the same time inside a single active script. 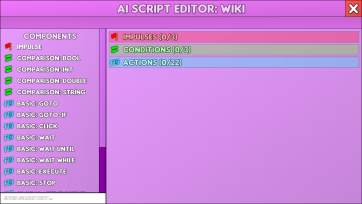 There are various types for data objects, placeholders or function arguments with each representing a different format of information.